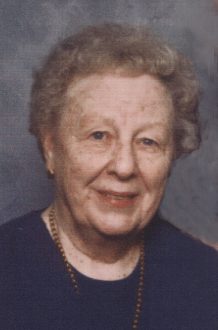 Obituary of May E. Morrison

May E. Morrison, 93, of Jamestown, passed away on Sunday, Oct.3, 2021 in UPMC Chautauqua. She was born Feb. 26, 1928 in Youngstown, OH, a daughter of the late Thure and Olga Hultin Nelson. May was a 1946 graduate of Jamestown High School and completed LPN school in 1964. Before retiring, she was a pediatric LPN at the former WCA Hospital. In earlier years, she was an operator for the former Alltel and the former Jamestown Telephone Company. May was a lifelong member of the Salvation Army where she played trombone and baritone in the band. She enjoyed knitting, reading, and travelling. May is survived by her daughter Nancy Thunberg, her son David N. Thunberg, both of Jamestown; a grandson David R. Thunberg of Jamestown; a step-daughter Ellen (Charles) Benoit of El Paso, TX; two step-granddaughters Annalisa (Miguel) Flores of Juarez, Mexico and Brita (Mohammed) Ali of Qatar; three great-grandchildren; and many nieces and nephews. In addition to her parents, she was preceded in death by her first husband Edelberth Thunberg in 1972; her second husband Roy Morrison in 2003; a son Donald Thunberg in 1992; and a sister Ruth Hedstrand on April 17, 2021. A funeral service will be held at 2 p.m. on Thursday, Oct. 7, 2021 in the Lind Funeral Home. Major John W. Merchant will officiate. Burial will be in Lake View Cemetery. Friends will be received from 1-2 p.m. on Thursday, for one hour prior to the service in the funeral home. Memorials may be made to the Salvation Army, 83 South Main St., Jamestown, NY 14701.

Share Your Memory of
May
Upload Your Memory View All Memories
Be the first to upload a memory!