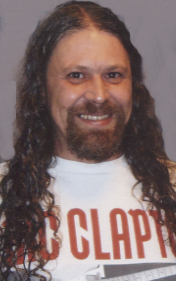 Daniel T. "Ruba" McCollum, 57, of Jamestown, NY, passed away at 12:16 pm Saturday, December 31, 2021, at UPMC Chautauqua. A lifelong area resident, he was born June 17, 1964, in Fredonia, NY, a son of the late Daniel T. McCollum and Delores Calanni McCollum. Ruba attended Fredonia Public School, St. James Parochial School and graduated from Jamestown High School in 1982. He was employed as a metal specialist for several area businesses until his retirement in 2021, due to ill health. Ruba was truly devoted to the many dogs he rescued over the years and was an avid hunter and loved camping. He had a deep appreciation for music and loved attending live concerts. He was a member of several social clubs but especially enjoyed times spent with his buddies during the Wednesday Night Pool League. Surviving is his wife, Amy S. Hultgren McCollum whom he had lived and loved life together since 2003 and were married December 28, 2012. He is also survived by a brother, Dale A. McCollum of Jamestown, and his sisters and brothers-in-law, Julie and Clark Poppleton, Laurie and Paul Volpe. Uncle Ruba will be forever loved and missed by his extended family including several nieces and nephews. This world has lost a beautiful soul. He was preceded in death by his father who died February 17, 2010, and his mother who died January 28, 2008. In keeping with Ruba's wishes there will be no formal service or visitation observed. Memorials may be made to the Chautauqua County Humane Society, 2825 Strunk Rd. Jamestown, NY 14701.