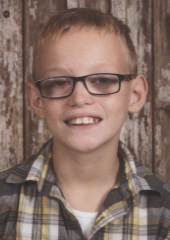 Jayden M. Lee, 11, of Willard Street in Jamestown, died very unexpectedly Thursday evening, January 13, 2022, at UPMC Chautauqua. A Jamestown native, he was born December 18, 2010, and was the son of Ashlyn Seekings and of Corey Lee, both of Jamestown. Jayden was presently a 5th grade student at Jefferson Middle School and previously attended Southwestern Elementary School. An avid WWE fan, Jayden loved wrestling. He also enjoyed going to the Boys and Girls Club and making crafts. Surviving besides his mother and his father, is his "bonus father" of several years, Brandon Mosley of Jamestown; three sisters, Amarah, Jashara and La'Mariana Mosley of Jamestown; and two brothers, Trent and Colyn Lee of Jamestown. Also surviving are maternal grandparents, Pamela Seekings of Youngsville, PA and Donald Seekings of Jamestown; paternal grandparents, Robert Lee and Tracey Vaughn, both of Jamestown; great aunt and uncle, Rhonda and Ellery Bauer of Jamestown; and many aunts, uncles and cousins who love him. Jayden was preceded in death by his great grandparents, Naomi "Fay" Scott and Clayton Scott. A funeral service will be held at 7 p.m. Tuesday in the Lind Funeral Home. Pastor Sherry Brzezinsky of the Youngsville Free Methodist Church will officiate. Friends will be received from 5 to 7 p.m. Tuesday, for two hours prior to the funeral service. Memorials may be made to the Jamestown Boys & Girls Club, 62 Allen St., Jamestown, NY 14701.

Share Your Memory of
Jayden
Upload Your Memory View All Memories
Be the first to upload a memory!
Share A Memory