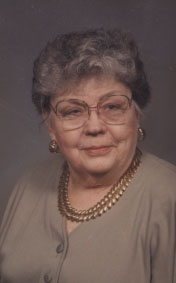 Betty L. Przepiora, 99, of 9584 Brownell Road, Clymer, died Saturday April 2, 2022, in Corry Memorial Hospital. She was born August 23, 1922, in Bemus Point, a daughter of the late Oscar and Bernice Dahlin Loomis. A 1940 graduate of Jamestown High School, she went on to earn a degree from Buffalo General Hospital School of Nursing in 1943. While raising her family she worked as night shift supervisor at Jamestown General Hospital and was later employed by BOCES as nursing instructor, for the inception of the program, where her students knew her as "Mrs. P". Stitching and sewing were her passions throughout her life. She was lead seamstress for the Jamestown Civic Ballet Company and was a member of the Embroiderers' Guild of America. As a youth she achieved the rank of Eagle Scout with the Girl Scouts of America and later served as a Cub Scout leader for each of her sons. All her children's friends fondly knew her as "Ma Prez". Surviving are two children John (Cindy) Przepiora of Atlantic, PA and Tina (Barry) Eggleston with whom she made her home; 23 grandchildren; 43 great grandchildren; a sister Carol Stewart of Huntsville, AL and a brother Robert (Mary) Loomis of Port Charlotte, FL. She was predeceased by her husband Walter Joseph Przepiora, Jr., whom she married November 13, 1943, and who passed on November 2, 1982. She was also preceded in death by five of her sons: Walter III (Joe), Charles, Stephen, Thomas, and Peter Przepiora. A memorial celebration of life will be held at a later date. Memorials may be made to a charity of choice. You may leave words of condolence at www.lindfuneralhome.com.