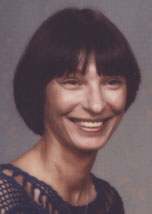 Daisy C. Russell, 81, of 31 Woodworth Ave. passed away Saturday, April 9, 2022 in her home. A Jamestown native, she was born March 8, 1941 and was a daughter of the late Norman N. and Ann Marie Ciancio Cady. In earlier years, she was employed by the former Jamestown Telephone Co. Daisy then worked for many years as a waitress at her family's business, The Ironstone Restaurant. In later years, together with her late husband Sam, they operated the Do-Rite Driving School. In former years, she was also a volunteer and supporter of the Muscular Dystrophy Association and was very proud of having met Jerry Lewis. Daisy loved time with her family, her adopted cat, Whiskers, and gardening in her yard. Surviving is her son, Adam Cady of Jamestown; her two granddaughters, Brianna Cady and Abbigail Cady, both of Fredonia; and two brothers, Michael Cady of Jamestown and Norm (Wanda) Cady of Lakewood. In addition to her parents, she was preceded in death by her husband, Samuel J. Russell II whom she married November 28, 1981 and who died December 25, 2004; and a sister-in-law, Linda Cady. The funeral will be held at 12 noon on Thursday, April 14th in the Lind Funeral Home. The Rev. Paul Cygan, Parochial Vicar of Holy Apostles Parish, will officiate. Burial will be in Holy Sepulchre Cemetery. The family will receive friends from 11 a.m. until 12 noon for one hour prior to the service in the funeral home Thursday. In lieu of flowers, memorials may be made to the Chautauqua County Humane Society, 2825 Strunk Rd. Jamestown, NY 14701; or the Alzheimer's Assoc. WNY Chapter, 6215 Sheridan Drive, Suite 100, Amherst, NY 14221-4837.

Share Your Memory of
Daisy
Upload Your Memory View All Memories
Be the first to upload a memory!
Share A Memory