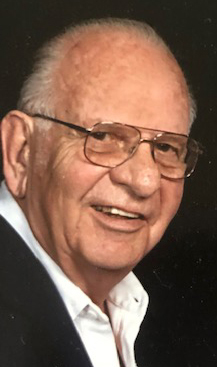 Allan L. Klenck, 91, formerly of Lakewood and 136 Aldren Avenue, Jamestown, died Tuesday April 19, 2022, in the Lutheran Home. A lifelong area resident, he was born February 1, 1931, in Jamestown, a son of the late William and Ardis Walker Klenck. He was a 1949 graduate of Jamestown High School. A Korean War veteran, he served in the US Air Force from 1951-55. Prior to his retirement in 1994, he was employed by Pearl City Paint and Glass as an industrial representative for 34 years. Following retirement he was a consultant with EMCO Finishing Products in Jamestown. He was a member of Kidder Memorial United Methodist Church for over sixty years, serving on various boards and committees and singing in the choir. He later joined Bemus point United Methodist Church. He was a member of Sertoma Club, a panelist on the weekly radio "Conversation" on WJTN and sang in the quartet Glory Bound. Surviving is his wife Janet Whitford Klenck, whom he married June 28, 1952; three children Brenda (Robert) Minton, Timothy (Dianne) Klenck and Kathy (Brian) Dahmer; grandchildren Andrew (Lisa) Minton, Sarah (Jonathan) Herendeen, Corrine (Chris) Case, Ashley (Drew) Lambert, Ryan (Chrissy) Klenck, Kristina (J.P.) Marozzi, Curtis Dahmer and Daniel Dahmer and great grandchildren Sage Minton, Nick, Ashlyn and Lauren Ruth, Abby, Isabella, and Jonathan Herendeen, Cameron and Caroline Case, Logan, Tyler and Jordan Klenck, Bella, Liam, and Joseph Marozzi and Mason Lambert. Besides his parents he was preceded in death by a brother Earl Klenck. The funeral will be held at 11 a.m. Saturday in the Lind Funeral Home. Rev. Joseph Pascoe will officiate. Burial will be in Sunset Hill Cemetery. Friends will be received from 3-5 p.m. Friday in the funeral home. Memorials may be made to Bemus Point United Methodist Church, 4954 Bemus-Ellery Rd #9737, Bemus Point, NY 14712or Chautauqua Hospice and Palliative Care, 20 W. Fairmount Avenue, Lakewood, NY 14750. You may leave words of condolence at www.lindfuneralhome.com.

Share Your Memory of
Allan
Upload Your Memory View All Memories
Be the first to upload a memory!
Share A Memory