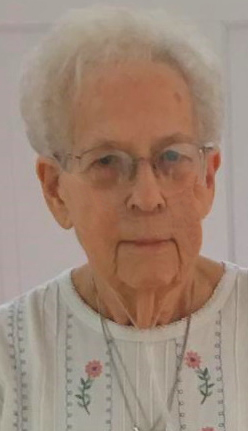 Get Directions
Monday
9
May

On the morning of May 4, 2022, Nola K. Riley passed away peacefully at the age of 88 years, in her daughter's home, surrounded by family. Nola was born January 25, 1934, in Kingsville, PA to Harry and Ruth (Cyphert) Summerville. Nola grew up in Clarion PA, graduating from Clarion Area High School, Class of 1951. Nola attended Butler Hospital School of Nursing graduating in 1954. Nola and husband Don were married June 12, 1954 after her graduation from nursing school. Don and Nola were married for 42 years prior to Don's passing in 1997. She leaves behind her daughter and sons with their spouses; Laura & Richard Seaholm; Michael & Brenda Riley; Rick & Tami Riley; John & Jenni Riley. Also surviving are seven grandchildren, Richie Seaholm, Melissa Jackino, Ian Riley, Noah Riley, Sarah Seaholm, Benjamin Riley, and Anna Riley along with nine great grandchildren. Survived by her sister-in-law Peggy Summerville and her Cyphert, Summerville, and Riley nieces and nephews. Preceding Nola in death is her husband, Don Riley, her brothers, C. Dean Summerville, William J. Summerville, and her daughter Kathleen S. Riley. Also preceded by many Cyphert, Riley and Summerville aunts, uncles, and cousins. Nola was a dedicated nurse throughout her life, working at various hospitals in NW Pennsylvania and SW New York before retiring from WCA Hospital of Jamestown in 1996. Nola spent all of 1996 caring for her husband and father, as they were both terminally ill that year. Nola cared for them at home full time with love and compassion and stubbornly telling us, "I don't need any help, I'm fine". Nola's loving friendships were very important to her since childhood. Nola also leaves behind friends that she has known since childhood and since moving to Jamestown, NY in 1959. Those friends meant the world to her and there were her various groups of high school classmates, nursing school classmates, our "second families" JoAnn and Marlin Cobb and Liz and Leonard Nordin and then over the years of working; her work friends and after retirement; the walking groups and many lunch groups, along with the Celeron Senior Group. She traveled frequently and took many interesting trips with her friends. One of her greatest joys was walking the beach and enjoying the sunshine with her trips to the ocean in Myrtle Beach, SC and the Pacific Ocean along the Oregon coastline. We are sure Mom is again basking at the sun at a beach somewhere. In lieu of flowers, please consider donations to your local Veterans organization. Mom had taken to supporting various Veteran causes, as the time her husband spent in the U.S. Army had been very important to both of them. The family will receive friends from 11:00 AM to 12:00 Noon Saturday, May 7, 2022, at the Lind Funeral Home. We invite all to attend the funeral service to follow at 2:00 PM on Saturday in Christ Chapel of Christ First United Methodist Church at 663 Lakeview Ave. The Reverend Susan Hadley, pastor will officiate. A private family burial will take place in the Clarion Cemetery, Clarion, PA. You may leave words of condolence to Nola's family at www.lindfuneralhome.com.

Share Your Memory of
Nola
Upload Your Memory View All Memories
Be the first to upload a memory!
Share A Memory