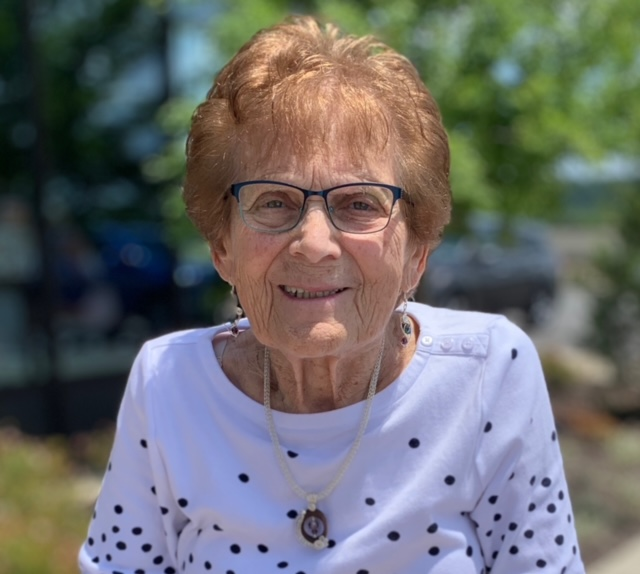 Angeline "Angie" Phillips Hine, 88, formerly of West Ellicott, passed away July 4, 2022, in Pittsburgh, following a long illness. The daughter of Italian immigrants, Angie was born July 20, 1933, in Jamestown, one of nine children of Giacomo and Sabastiana San Filippo. She was a graduate of Jamestown High School and a member of Sacred Heart Roman Catholic Church in Lakewood. She married her husband, Roy Hine, in 1954, and they raised a family of six kids on Allegheny Avenue, where they lived for 49 years. Angie had a strong work ethic and helped her husband in his donut shop and window washing businesses. Over the years, she sold both men's and women's clothing at Century, Stuarts, and Richmond Bros. A wicked poker player, Angie never went anywhere without a deck of cards in her purse. She loved to play Bingo, the lottery, and especially the slot machines on occasional trips to the casino. She enjoyed gardening and bowling, and she passed along her artistic talents to her children. But nothing brought her more joy than to have her whole family home for a legendary, old-fashioned Hine Family Christmas. Her children will take comfort anytime they see her favorite bird, a bright red Cardinal, knowing her spirit is alive and well. Along with her parents, she is preceded in death by her husband of nearly 60 years, Roy, whom she lovingly nursed through a long illness until his death in 2014. Together they suffered the loss of three children: daughter Diane in 1977, son Roy in 2007, and her stepson Larry in 2010. She is survived by her children T. J. (Claudia) Hine of Chicago; Jan Johnson of Nashville; Dan (Sheryl) Hine of Hamilton, VA; and Beth (Ken) Mattheis of Pittsburgh; grandchildren Aubrey Hine; Adam Luhmann (fiancé Ellen Searles); Andy Luhmann; and Alyssa Mattheis; step-grandchildren Troy Hine and Jennifer (Aaron) Lyons; as well as her brother, Jim Phillips, and many nieces and nephews. Friends will be received from 4:00–7:00 p.m. Friday in the Lind Funeral Home. A Mass of Christian Burial will be celebrated at 11 am Saturday, in Sacred Heart Catholic Church, Lakewood. Rev. Piotr Zaczynski will be celebrant. Burial will be in Sunset Hill Cemetery. You may leave words of condolence at www.lindfuneralhome.com.

Share Your Memory of
Angeline
Upload Your Memory View All Memories
Be the first to upload a memory!
Share A Memory