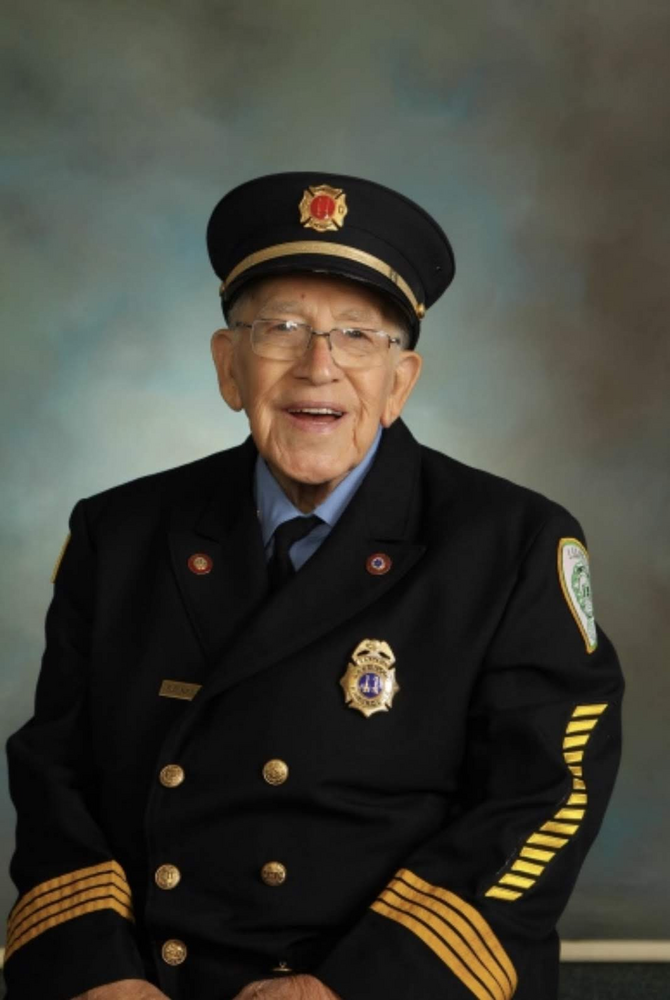 Edwin N. Nelson, Jr., 92, 2450 Vukote Road, Ashville, went home to be with his Lord and Savior Monday July 25, 2022, in Heritage Village Rehab and Skilled Nursing. He was born September 22, 1929, in Muskegon, MI, a son of the late Edwin Katherine Erickson Nelson, Sr. He attended Lakewood High School. A veteran of the US Navy he served as a machinist mate second class aboard the USS Braine DD630 from 1951-54. Prior to his retirement he was employed by DeBell Vending as service manager for over 40 years. He earlier had worked for Jenkins Dairy as a milkman and met his future wife. He was a 74-year veteran of the Lakewood Fire Department where he served as first assistant chief, second assistant chief, president of the fire company and captain of the fire police. A dedicated volunteer, he responded to over 13,000 alarms in his lifetime, was named fire fighter of the year by the American Legion and has been presented several proclamations by New York State for his years of service. Beside his dedication to the fire department, he was a beloved family man who enjoyed spending time with his children, grandchildren, great grandchildren, and anyone else who showed up. He enjoyed hunting, fishing, and he could fix anything that was broken. He touched the hearts of anyone he ever met. He had such an impact on so many. Surviving are four children Laura (Todd) Gilbert of Lakewood, Edwin (Julie) Nelson III of Ashville, James B. Nelson and Tracy (Tom) Phillips all of Lakewood and; fifteen grandchildren Edwin N. Nelson, IV, Nichole Potter, Ryan Curcio, Jennifer Nelson, Bonnie Curcio, James Nelson, Jr., Ashley Nelson, Troy Carlson, Alicia Moore, Brian Nelson, Colten Swan, Michaele Marsh, Nolan Emerson, Marissa Nelson and Miranda Nelson; thirty two great grandchildren; a sister Katherine "Kitty" Parker of Dewittville; a brother Arthur "Arkie" Nelson of Lakewood and several nieces and nephews. He was preceded in death by his wife Bonnie Jean Costlow Nelson, whom he married December 24, 1955, and who died February 22, 2018; a son Douglas Nelson, March 2016; two brothers Richard and Robert Nelson and three sisters Nina Depas, Dorothy Depas and Edna Farnsworth. The funeral will be held at 11 am Friday in Busti Church of God. Burial will be in Bentley Cemetery, Lakewood. Friends will be received from 4-7 pm Thursday in the Lind Funeral Home. Memorial may be made to the Lake Volunteer Fire Department, 37 W. Packard Blvd, Lakewood, NY 14750. You may leave words of condolence at www.linfuneralhome.com.

Share Your Memory of
Edwin
Upload Your Memory View All Memories
Be the first to upload a memory!
Share A Memory