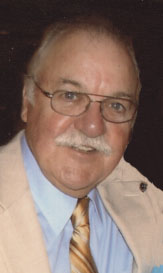 Charles G. "Charlie" Heggarty, 74, of Jamestown, NY, passed away at 6:05 am Tuesday, July 26, 2022, in his home, following an extended illness. Coming to the United States in 1958, he was born August 22, 1947, in Glasgow, Scotland, a son of John and Annie Falloon Heggarty. Charlie attended the former St. James and Ss. Peter & Paul Parochial School, where he was given the nickname "Scotty". He was a 1965 graduate of Jamestown High School. He was a proud veteran of the U.S. Air Force serving from May 25,1966 to December 15, 1969, being honorably discharged as a Sergeant. Before his retirement, he was employed by the City of Jamestown Board of Public Utilities for 30 years. He was a communicant of St. James Catholic Church where he sang in the choir and was also a member of the Herman Kent Post 777 American Legion and the Lakewood Rod & Gun Club and was a volunteer at St. Susan's Center for 8 years. He will be remembered as a loving and caring husband, father and grandfather who loved taking vacations with his family to Ocean City, MD, enjoyed playing golf. He loved to travel with Valerie and together they visited many countries including, Greece, Turkey, England, Scotland, and Ireland. They also traveled to many major league baseball parks following the Cleveland Indians and New York Mets. He was an avid Buffalo Sabres fan and was a season ticket holder for many years. He was a longtime coach of the Jock Shop Team in the Little League - Bambino League baseball, where he had the privilege of coaching his sons and made a positive impact on all his players. He also coached them in the indoor and outdoor soccer leagues. Surviving is his wife of 48 years, Valerie M. Constantine Heggarty, whom he married July 28, 1974, two sons; Sean Heggarty of Lehigh Acres, FL and Andrew Heggarty of Jamestown, NY, four grandchildren; Mia Heggarty of Jamestown, Bree and Bailee Heggarty of Lehigh Acres, and Declan Johnston of Jamestown, and a brother, John Heggarty of England. Charlie is also survived by several nieces and nephews in New York, Minnesota, and California, as well as an aunt and many cousins in Scotland and England. Besides his parents, he was preceded in death by two sisters, Anne Marie Kronick and Elizabeth A. Heggarty. A Mass of Christian Burial will be celebrated at 10 am Monday, August 1, 2022, in St. James Catholic Church. Friends will be received from 5-8 pm Sunday, July 31, 2022, in the Lind Funeral Home where a Christian Wake Service will be led at 4:45 pm Sunday in the funeral home. In lieu of flowers, memorials may be made to St. James catholic Church, or St. James Music Ministry, 27 Allen St. Jamestown, NY 14701 or to Chautauqua Hospice and Palliative Care, 20 West Fairmount Ave. Lakewood, NY 14750.