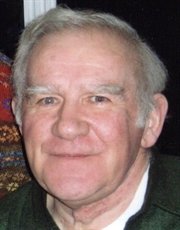 Obituary of Charles B. Anderson

Charles B. Anderson, 69, of 1021 Newland Ave., died Thursday, October 15, 2009 in his home. An area resident most of his life, he was born August 14, 1940 in Poughkeepsie, NY, a son of the late William C. and Mildred Sullivan Anderson, and graduated from Jamestown High School. He was a well-known area butcher, beginning his career at the former A &amp; P Store in Jamestown and retiring from the Wegmans Store in Lakewood. He had also been a partner in the former Carlson Viking Food in Jamestown. Chuck lived for his family. He adored his grandchildren and served as caretaker for the whole family throughout the years. There was nothing that he was not able to answer, help with or provide for his entire family. Surviving is his wife, Kathleen Davis Anderson, whom he married September 22, 1962; a son, Ronald (Hope) Anderson of Jamestown; three grandchildren, Alyssa Anderson, Ronnie Anderson and Mia Gable, all of Jamestown; a brother, William (Pauline) Anderson of Sumter, SC; and many nieces and nephews. He was preceded in death by his father in March of 1993 and mother in November of 1993; a daughter, Amy Sue Anderson who died October 8, 1976; two sons, Jeffrey B. Anderson on February 4, 1976 and Jon W. Anderson on September 8, 2008; two sisters, Mary Anderson and Ann Anderson; and a brother, Daniel R. Anderson. The funeral will be held at 11:00 a.m. Monday in the Lind Funeral Home. Msgr. Joseph M. Dowdell will officiate. Burial will be in Lake View Cemetery. Friends will be received from 4 to 7 p.m. Sunday in the funeral home. Memorials may be made to the Cystic Fibrosis Foundation of WNY, 4976 Transit Road, Depew, NY 14043.
Print