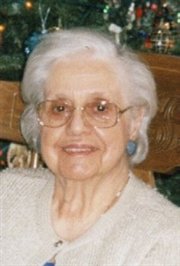 Angeline M. Salone, 90, formerly of 2631 Palm Rd and 1146 N. Main St., died Saturday October 10, 2009 in the Lutheran Home and Rehabilitation Center. A Jamestown native, she was born March 12, 1919, a daughter of Joseph and Nicolina Conte Milone. Prior to her retirement she was employed by the former Jamestown General Hospital as manager of the employee's cafeteria for 24 years, where in 1985 she received the distinguished employee award. She was a communicant of Holy Apostles Parish Ss. Peter and Paul Catholic Church and was a long time active member of its ladies prayer group. She was an avid reader and enjoyed doing crossword puzzles and oil painting. Her greatest joy, however, was the time spent cooking for her family who always looked forward to spending every holiday at her home. Surviving are three daughters RoseMarie (Jack) Rizzo of Jamestown, Paula (Dean) Johnson of Jamestown and Diane Hitchcock of Jamestown, ten grandchildren and twenty great grandchildren, a son-in-law Raymond Oljeski of Monroe, NC and two special nieces whom she helped raise, Christine Dorsey and Annette Sielski, both of Jamestown. She was preceded in death by her husband Dominick M. Salone, whom she married June 12, 1943 and who died July 31, 1968, a daughter Patricia Ann Oljeski, a brother Thomas Milone and five sisters Josephine Lupica, Anna Cardner, Carrie Sali, Mary Wetzstein and Sarah Shoemaker.. A Mass of Christian Burial will be celebrated at 10 a.m. Tuesday in Holy Apostles Parish at Ss Peter and Paul Catholic Church. Burial will be in Holy Cross Cemetery. Friends will be received from 2-4 and 7-9 p.m. Monday in the Lind Funeral Home, where a Christian Wake Service will be led at 1:45 p.m. Monday Memorials may be made to Holy Apostles Parish Ss Peter and Paul Catholic Church or Hospice of Chautauqua County.
Print