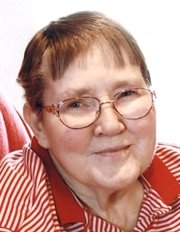 Betty C. Johnston, 83, of 4108 Hopkins Rd., Kennedy, died at 9:00 p.m. Friday, September 25, 2009 at the Hamot Medical Center in Erie. A lifelong area resident, she was born July 31, 1926 in East Otto, NY, a daughter of the late George and Marge Peters Hilliman. Betty served in the US Air Force during the Korean War and was the first woman to train in Air Force control towers. Following the military, she worked in the woolen mills in Little Valley and later met her husband-to-be while working at the Five Corners Coffee Shop in Jamestown. Betty married Arthur R. Johnston on December 31, 1954 and became a fulltime homemaker and mother, a role she held proudly for the rest of her life. Betty enjoyed books, animals and all kinds of crafts. She was especially fond of woodworking. Surviving are her children, Cynthia Johnston, Arthur R. Johnston Jr. (Nancy) and Annette Abbott (Dennis Finch), all of Kennedy; seven grandchildren, Alexander Johnston, Angelique "Angel" Troutman (Tim), Arthur "Rob" Johnston III (Jen Mosher), Chelsea Goodwin (Steve), Samuel Abbott III, Brandon Abbott and Bronson Abbott, all of Kennedy; three great-grandchildren, Kayla Brentley, Emily Brentley and Madalyn Troutman; two step great-grandchildren, Ethen Troutman and Hannah Brant; and her beloved toy poodle, Saddie. She was preceded in death by her husband who died May 21, 1995; and a sister, Joyce McCabe and brother, Albert Kennison. The funeral will be held at 11:00 a.m. Tuesday in the Lind Funeral Home and will be led by Betty's grandson, Brandon Abbott. Burial will be in Lake View Cemetery. Friends will be received from 2 to 4 and 7 to 9 p.m. Monday in the funeral home. In lieu of flowers, memorials may be made to the Southern Tier Kidney Association or the Chautauqua County Humane Society.
Print