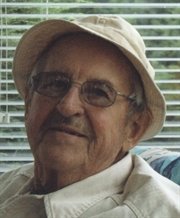 Dr. William E. Chalecke, 92, of Horton Road, Jamestown, died Tuesday, September 22, 2009 peacefully in his home. He was born September 10, 1917 in Southington, CT to parents of Russian and Polish descent, Lucyian and Anna. Following graduation from Lewis High School in Southington, he entered Harvard University, graduating in 1939 with a B.A. degree. To support Bill's education expenses, his mother did factory work and Bill worked at various jobs including dishwasher and manager of food stands at football games, perhaps beginning his lifelong interest in food preparation. In addition to being a member of the Naval Reserve during World War II, he was in medical school at the University of Rochester School of Medicine. He interned at Strong Memorial Hospital in Rochester and received his M.D in 1943. During his surgery internship, he met and began a courtship with Lois B. Horton of Jamestown. Family legend has it that they met over a bedpan sterilizer. Dr. Chalecke accepted a position with Boeing Aircraft in Seattle, WA where he worked with pilots and became the Flight Surgeon. This work fascinated him and he rose to prominence at Boeing, studying many medical conditions and flying in a specially equipped B29 aircraft. Lois came to Seattle to be married to Bill on December 2, 1944, very early in his career. Their first daughter, Cherrie, was born in Rochester, NY in September of 1945 while Lois was living with friends and waiting to join her husband who was in St. Louis serving his residency in Obstetrics and Gynecology at Barnes Hospital. Bill then went to Los Alamos, NM where he served as Chief of Obstetrics and Gynecology at Washington University. It was at this time that their daughter, Linda Lee was born in May of 1948. The family returned to Lois' hometown of Jamestown in 1949. Bill joined the practice of Dr. Ernest Kelley and in 1950, opened a formal practice in OB-GYN. From 1953 to 1955, he served as a Captain in the U.S. Medical Corps at Waltham Massachusetts Army Hospital. In 1958, he limited his practice in Jamestown to gynecology. Originally residing on Clyde Ave., the Chaleckes purchased a home at 543 Lakeview Ave. where a medical office was established and the family lived for many years. Dr. Chalecke served as President of the WCA Hospital Staff, Director of Medical Education at Jamestown General Hospital, President of the Chautauqua County Medical Society, President of the Health Organization of Western New York and President of the University Club in Jamestown. In 1979 he became Director of Quality Assurance at Jamestown General Hospital, and served for 11 years. In 1990, Bill wrote and self-published the book, "Good Doctors: Good Patients." His impetus to do so came from his deep belief in the principles of personalized medical care. In his years on Horton Road, Bill was blessed with genuine friendship and support from his neighbors and Jamestown community friends. He was a member of Holy Apostles Parish and usher at St. John Church. His daily life included his family, daughters Cherryl Ann Barbour of Tucson, AZ and Linda Meyer of Rochester, NY. In addition to his grandchildren, Eve Meyer Harrington and Eben Meyer, both of Rochester, he adored Eve's husband Garrett Harrington and their son, Jack Ryan. Bill is also survived by his brother Bernard and sister Dorothy, both of Connecticut. He was preceded in death by his beloved wife Lois, who died December 30, 2007. A memorial service will be held at a later date to be announced by the Lind Funeral Home. Memorials may be made to the Chautauqua County Humane Society, 2825 Strunk Road, Jamestown, NY 14701; or the WCA Hospital Foundation, P.O. Box 214, Jamestown, NY 14702-0214.
Print