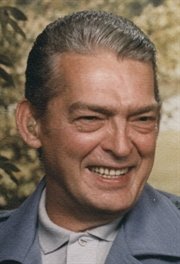 Joseph O. Schuckers, 80, of Sawmill Run Road, Frewsburg, died Sunday, August 2, 2009 at the Erie County Medical Center in Buffalo, NY. An area resident most of his life, he was born October 29, 1928 in Brookville, Pa., a son of the late Franklin and Amy Shobert Schuckers. Joe served in the US Navy from 1946 to 1948 and later played bush league baseball in Onoville, Pa. A retired tool &amp; die maker for the former Proto Tool Company, for many years he also was a Babe Ruth League baseball coach in Jamestown. He was a member of the Randolph Masonic Lodge #359. Joe especially enjoyed deer hunting and his dog, Jasper. Surviving are five children: Amy Cuhel-Schuckers (Rostislav Cuhel) of Fredonia, NY, Julie Erickson (Tony DeJosia) of Port St. Lucie, FL, Trudy Foster (David) of Colorado Springs, CO, Paul John Schuckers (Darlene Spindler) of Frewsburg, NY and Jeanette Hernandez (Roberto) of Fountain, CO; nine grandchildren: Michelle Foster of Denver, CO, Mark Foster of Chicago, IL, Julie Roe (Aaron) of Henrico, VA, Jill Erickson of San Jose, CA, Cassandra Hernandez of Fountain, CO, Joseph Hernandez, US Army stationed in South Korea, Tere'sa Walker of Jamestown and Amra and Myava Cuhel, both of Fredonia; five great grandchildren; a daughter-in-law, Laurie Wilcox Schuckers of Celoron, NY; and numerous nieces and nephews. In addition to his parents, he was preceded in death by a son, Joseph A. Schuckers; three brothers, Loraine, Kenneth and Warren Schuckers; and a sister, Ethyl Snyder. The funeral will be held at 4:00 p.m. Thursday in the Lind Funeral Home. The Rev. Mark Parsons will officiate. Friends will be received for two hours prior to the service (from 2 to 4 p.m.) in the funeral home Thursday. In lieu of flowers, memorials may be made to the Jamestown Babe Ruth League, P.O. Box 3208, Jamestown, NY 14702, in support of the existing annual Joseph A. Schuckers Sportsmanship Award.
Print