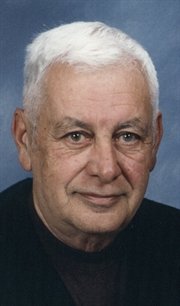 Douglas C. Macfarlane, 75, of 39 Elam Ave., a devoted husband, father, grandpa and papa, passed away peacefully with his family by his side at 5:35 a.m. Tuesday (July 28, 2009) in W.C.A. Hospital following a brief illness. A lifelong area resident he was born May 1, 1934 in Jamestown, NY a son of the late John C. and Claire Meli Macfarlane. He was a veteran of the U.S. Army serving in the Military Police Division from January 22, 1957 to January 21, 1959 and also served in the U.S. Army Reserves until December 31, 1962. Prior to his retirement in 1996 he was employed by Hopes Windows, Inc. for 46 years where he was a works manager and superintendent. Following his retirement he worked for several years for U.S. News. He was a communicant of St. James Roman Catholic Church and was a member of the AMVETS and the Lakewood Rod &amp; Gun Club. He also served as Treasurer and Assistant Treasurer of the Hopes Employees Federal Credit Union from 1961 to 1996. Surviving are his wife the former Grace M. Condon whom he married June 4, 1955, two sons, David (Becky) Macfarlane of Jamestown, Donald (Mary) Macfarlane of Lantana, FL, a daughter Linda (Paul) Nelson of Jamestown, six grandsons, Daniel (Dacil) Macfarlane of Tempe, AZ, Dustin Macfarlane of Columbia, SC, Jordan and Chad Nelson of Jamestown, Briar and Colton Macfarlane of Lantana, FL, his brother Robert C. Macfarlane of West Palm Beach, FL and several nieces and nephews. A Mass of Christian Burial will be celebrated at 10:00 a.m. Friday in St. James Catholic Church. The Rev. Robert A. Stolinski, pastor will be celebrant. The family will receive friends from 2-4 &amp; 7-9 p.m. Thursday in the Lind Funeral Home where a Christian Wake Service will be led by Rev. Stolinski at 1:45 p.m. Thursday. Memorials may be made to the St. James Catholic Church, 27 Allen St., Jamestown, NY 14701, the W.C.A. Hospital Foundation, P.O. Box 214, Jamestown, NY 14701 or to a charity of one's choice.
Print