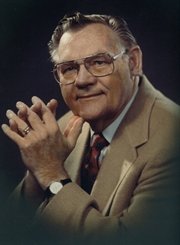 Obituary of Marshall B. Dahlin

Marshall B. Dahlin, 89, of 21 Highland Ave. died at 6:50 a.m. Tuesday (July 7, 2009) in W.C.A. Hospital. A lifelong area resident he was born June 17, 1920 in Jamestown, NY a son of the late Simon Peter and Alice Ellison Dahlin. He was a graduate of Jamestown High School and was a veteran of the U.S. Army Air Force serving in North Africa during World War II. He was a member of the First Covenant Church, a life member of the Ingjald Lodge # 65 Independent Order of the Vikings, life member of the Ira Lou Spring Post # 149, American Legion and a life member and past Lieutenant Gov. of the Jamestown Optimist Club. Marshall's greatest love was his involvement with the Lucille Ball Little Theatre of Jamestown. After seven decades of acting, directing and being the business manager for a busy theater he retired in May of this year. He and his late wife Virginia shared a love for the theater and the company has named the auditorium where the public attends performances "The Marshall and Virginia Dahlin Auditorium" in their honor. The Little Theatre of Jamestown held a tribute service on June 20, 2009 recognizing his 70 years of service to the theater. During his involvement in the theater he was a member of the Theater Association of New York State, the American Association of Community Theaters and had attended the Shaw Theater on Niagara on the Lake, Ontario. Before his retirement in May of 2009 he was the business manager for the Lucille Ball Little Theatre of Jamestown and had previously been the business manager for the Sherman Central School District, retiring from there in 1987. In earlier years he was a salesman for the Canada Dry Company for 20 years. Surviving is a daughter Lauretta (Robert) Schang of Wooster, OH, two sons, Donald B. (Caryl) Dahlin of Tonawanda, NY, Roger E. (Susan) Dahlin of Carrollton, TX, five grandchildren, Stephen Dahlin, Heather Monterro both of Tonawanda, NY, Allison Rivera of Grand Island, NY, Jennifer Dahlin, Emily Dahlin both of Carrollton, TX, a great granddaughter Seaira Monterro, a sister Doretta Sheffield of Jamestown and a brother Warren Dahlin of Tonawanda, NY. Besides his parents he was preceded in death by his wife the former Virginia Nelson Dahlin whom he married March 11, 1944 and who died April 17, 1998, and a brother Clayton Dahlin. The funeral will be held at 11:00 a.m Friday in the Lind Funeral Home. The Rev. David Trosper, pastor of the First Covenant Church will officiate. Burial will be in the Maple Grove Cemetery, Frewsburg, NY. The family will receive friends from 7-9 p.m. Thursday in the funeral home. Memorials may be made to the Lucille Ball Little Theatre of Jamestown, 18 East Second St., Jamestown, NY 14701.
Print