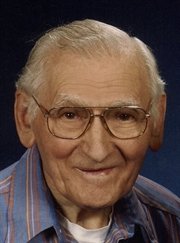 Jack N. Romaniuk, 87, of 1165 Prendergast Ave., died at 11:55 a.m. Friday (June 12, 2009) in Tanglewood Manor. He was born July 27, 1921 in Baltimore, MD, the son of the late Jacob and Mary Uleryk Romaniuk. Prior to retirement, Jack taught Art in the Falconer, Kennedy, and Ellington Schools. During the summer, he painted houses and worked for Sealtest Ice Cream. He was a communicant of Holy Apostles Parish SS Peter and Paul Catholic Church. A veteran of WWII, he served as a corporal in the US Army, receiving the American Campaign Medal; EAME Campaign Medal; Good Conduct Medal; and the World War II Victory Medal. Surviving are two sons, John (Bernadine Banks) Romaniuk of Columbus, OH; Richard (Linda) Romaniuk of Lakewood, NY; six grandchildren, Jason Alm, Sarah Romaniuk, and Ashley Romaniuk of Columbus; Brandy Romaniuk of Houston, TX; Justin and Jordyn Romaniuk of Lakewood; four great grandchildren; and a sister, Sophie Cary of Brockport, NY. He was preceded in death by his wife, Therese Kunzler Romaniuk whom he married August 20, 1955 and who died February 26, 2009; and three sisters and one brother. A Concelebrated Mass of Christian Burial will be held at 10 a.m. Monday in Holy Apostles Parish SS Peter and Paul Catholic Church. The Rev. Dennis W. Mende, pastor, and the Rev. Msgr. Richard Gill, retired priest, will be concelebrants. Burial will be in Holy Cross Cemetery. Friends will be received from 3 to 5 p.m. Sunday in the Lind Funeral Home where a Christian Wake Service will be held at 4:45 p.m. Sunday.
Print