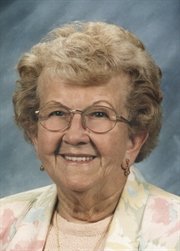 Jeanne L. Stafford, 84, formerly of 312 Hunt Road WE, died peacefully Tuesday (May 19, 2009) surrounded by her family in the home of her daughter in Bemus Point. She was born June 19, 1924 in Branchton, PA the daughter of the late Theodore and Corrine Schroeder Wigton. Jeanne was restaurant manager at the former Argersingers Department Store, and earlier worked in the gift wrapping department of the former Bigelow's Department Store. During the war, she worked at Anderson Cleaners, making sleeping bags and tents for the war effort. She was a 1944 graduate of Jamestown High School and a member of St Luke's Episcopal Church, Lakewood Rod and Gun Club Auxiliary, Herman Kent Post 777 American Legion Auxiliary, Celoron/West Ellicott Senior Citizens, and Home Bureau. Jeanne enjoyed bowling, dancing, playing cards, roller skating, sewing, and knitting. Surviving are a son, Charles T. "Charlie" Stafford of Busti; two daughters, Terrie (Erick) Peterson of Jamestown; Chris (Joe) Granada of Bemus Point with whom she made her home; 10 grandchildren, Heather Stafford of Geer, SC; Donny (Melissa) Stafford of Corning, NY; Matthew and Jonathan Stafford both of Busti; Master Sgt. Todd (Chastity) Bigney of Charleston, SC; Tracy Chau of Conewango, NY; Trisha (Rick) Sperry of Kennedy, NY; Gina (Dave) Greco of Jamestown; Erick R. (Shishi) Peterson and Sandy (Jeff) Hopkins, both of Kennewick, WA; 11 great grandchildren, Lee, Justin, Shelby, Marissa, Gabriel, Toby, Skylar, Ty, Shaun, Massimo, and Eliana. Besides her parents, she was preceded in death by her husband, Charles H. Stafford, whom she married May 2, 1945 and who died December 9, 1997; and her sister and brother in law, Joyce and Chet Wilbur. The funeral service will be held at 11 a.m. Saturday in the Chapel of St Luke's Episcopal Church. The Rev. Susan Anslow Williams, Associate Rector will officiate. Burial will be in Sunset Hill Cemetery. The family will receive friends from 2 to 4 and 7 to 9 p.m. Friday in the Lind Funeral Home. Memorials may be made to Hospice Chautauqua County 4840 West Lake Road Mayville, NY 14757.
Print