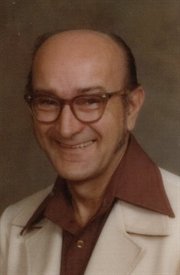 Robert C. Broberg, 81, of 47 Sturges St. died at 2:01 a.m. Wednesday (May 13, 2009) in W.C.A. Hospital. An area resident since 1952, he was born January 12, 1928 in Houtzdale, Pa a son of the late Oscar E. and Hilda Johnson Broberg. He was a graduate of the Woodward High School in Houtzdale, PA and was a veteran of the U.S. Army serving in the 7th Infantry Division 31st Infantry Regime as a tank gunner during the Korean War from 1946-1948. Before his retirement in 1993 he worked as a press operator for the Weber-Knapp Company for 18 years. In earlier years he had worked for the former Art Metal Incorporated and the former Automatic Voting Machine Company. He was a member of the Bethel Lutheran Church and will be remembered as an avid fan of the Penn State Nittany Lions and the Pittsburgh Steelers. Surviving are his wife the former Bonnie Wolford whom he married June 28, 1975, two sons Jeffrey R. (Trish) Broberg of Winston Salem, NC, Craig A. Broberg of Frewsburg, NY, a daughter Denise A. Johnson of Greensboro, NC, three grandchildren Aaron Broberg of Greensboro, Kurt Lindboom-Broberg, Kristin Lindboom-Broberg both of Frewsburg. Besides his parents his was preceded in death by his first wife the former Evelyn M. Groters Broberg whom he married December 7, 1957 and who died August 20, 1973, four grandchildren Daulton and Denise Johnson, Todd and Mikaela Lindboom-Broberg, a son in law Don Johnson, three sisters Phyllis Casker, Ruth Broberg, Joan Reifer and six brothers, Clayton, Arthur, Russell, Clifford, Oscar and James Broberg. The funeral will be held at 1:00 p.m. Monday in the Lind Funeral Home. The Rev. Norman R. Gauch, pastor of the Bethel Lutheran Church will officiate. Burial will be in the Sunset Hill Cemetery. Friends will be received from 2-4 p.m. Sunday in the funeral home. Memorials may be made to the David W. Love Memorial Scholarship Fund, c/o The Chautauqua Region Community Foundation, 418 Spring St., Jamestown, NY 14701.
Print