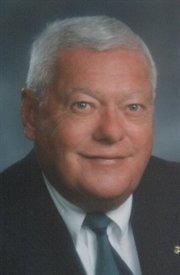 Obituary of George A. Campbell

George A. Campbell, 81, of 116 Sunset Ave., Lakewood, died at 1:40 p.m. Saturday, May 9, 2009 in WCA Hospital. He was the husband of Jane Lawrie Campbell, whom he married September 6, 1952. An area resident since 1964, he was born October 30, 1927 in Bridgeport, CT, the son of the late George and Inez Bartlem Campbell, and was a graduate of the University of Bridgeport. George was a veteran of the United States Marine Corps, where he had served from 1946 to 1948 and again from 1950 to 1951. He was the vice president and general manager of the Ring and Pierce-All Division of Producto Machine Company in Jamestown, retiring in 1992. George was a vestryman and warden at St. Luke's Episcopal Church in Jamestown and had also been a member of the vestry at St. Peter's Episcopal Church in Connecticut. He was a board member for the Gebbie Foundation, Chase Bank, YMCA of Jamestown, Chautauqua County Chamber of Commerce, the Manufacturer's Association, American Red Cross (where he had donated 172 pints of blood), United Way of Southern Chautauqua and the Dowcraft Corporation. He also belonged to the Optimist's Club and the Sportsman's Club. George's extensive volunteerism included the St. Susan Center; Mothers Against Drunk Drivers; Chautauqua County Impact Panel, speaking on real-life impacts of drunk driving and their consequences; Chautauqua County Special Olympics, where he and his wife, Jane, have personally awarded Katie Campbell Rexford medals, in honor of their daughter, to excelling special education participants; and WCA Hospital, where George had volunteered 1340 hours. While in Florida, he also enjoyed volunteering at the National Museum of Naval Aviation in Pensacola. In 2006, George and Jane received the John D. Hamilton Community Service Award presented by the Chautauqua Region Community Foundation. In addition to his wife, surviving is a son, David (Lynne) Campbell of Middleburg, FL; two daughters, Laurie (Charles) Barney of East Amherst, NY and Sarah (Rick) Recio of Wellsville, NY; five grandchildren, Caitlin and Andrew Barney of East Amherst, and Katie, Daniel and Mitchell Recio of Wellsville; and a niece and nephew, Barbara Bunting of Boulder, CO and Richard Weisehan of Avon, CO. He was preceded in death by a daughter, Catherine "Katie" C. Rexford, who died March 30, 1985; and a sister, Dorothy Weisehan. The funeral will be held at 11:00 a.m. Thursday in St. Luke's Episcopal Church. The Reverends Eric M. Williams and Susan Anslow Williams will officiate. Inurnment will be in the St. Luke's Church Columbarium. Friends will be received from 2 to 4 and 7 to 9 p.m. Wednesday in the Lind Funeral Home. In lieu of flowers, memorials may be made to the Special Olympics, c/o Robert Gould, 4885 Merritt Road, Bemus Point, NY 14712; St. Susan Center, P.O. Box 1276, Jamestown, NY 14702-1276; WCA Foundation, Inc., P.O. Box 214, Jamestown, NY 14702-0214; or St. Luke's Episcopal Church, 410 North Main St., Jamestown, NY 14701.
Print