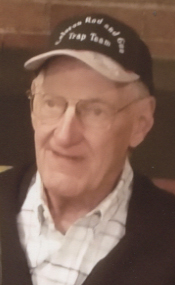 Robert L. Carlson, 84, of Martin Road, Jamestown, passed away on Tuesday, July 9, 2019. He was born June 26, 1935 in Jamestown, the son of the late Stanley and Elsie Carlson Carlson. He attended Jamestown schools and began his employment at age 18 at the Automatic Voting Machine Corp. followed by Marlin Rockwell, where he became a production scheduler. In 1961, he began a 35 year career as a casualty insurance investigator and adjuster in Western New York. He was first employed with National Grange Insurance Company of New Hampshire for 21 years. He then worked as adjuster in charge of the Jamestown, New York office of Crawford and Company of Atlanta, Georgia, where he worked until his retirement. Bob was a loving husband and father. He was a gentle giant who always had a kind word or gesture for family and friends. He was active in many organizations, where he was often found working behind the scenes. He was in the National Guard from 1953-1961. He was a lifetime member of the Celeron Rod and Gun and Pine Grove Rod and Gun, a member of the Jamestown Rifle Club and the American Legion Samuel Derby Post. Bob was a lover of the outdoors and a lifelong sportsman. He enjoyed camping with family, fishing and boating. He was a muskie fishing enthusiast and had the patience to spend hours trying to get the big one. For competition sports, he enjoyed the shotgun clay target games of skeet, trap and sporting clays. He was a mentor to many area shooters. He especially enjoyed teaching his great-nephew, Trevor. In earlier years, he was most proficient at skeet and was extremely proud of being co-founder of the Chautauqua County Winter Skeet League, which is now in its 58th successful season, being a boost to many local gun clubs in the off season months. He is survived by his nieces: Christine (Chris) Bailey-Kellogg and Catherine B. (Eric) South; his nephew Robert R. (April) Bailey Jr.; and his great-nieces and nephew: Bailey and Trevor South, Amelia Bailey-Kellogg, and Macy and Nora Bailey. In addition to his parents of Jamestown, he was preceded in death by his loving wife, Phyllis Smith Carlson, whom he married on August 24, 1963, and who died April 18, 2003; and his beloved son, Thomas R. Carlson, who died November 28, 2016. Friends will be received from 4-7 pm on Tuesday, July 16, 2019 at the Lind Funeral Home. A service of remembrance will take place on Wednesday, July 17, 2019 at 11:00 am at the Lind Funeral Home with a graveside interment at the Lakeview Cemetery immediately following. Memorials may be made to the Chautauqua County Humane Society.