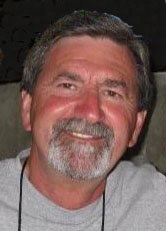 Howard Robert Moore – May 20, 1950 – October 4, 2019 Howard was many things: devoted son, loving husband, wonderful father, brother, and grandfather. Howard was a successful businessperson, a veteran, and a helpful neighbor. Howard was also a partial paraplegic, an incredibly hard worker, and despite his handicap, Howard was an avid and talented gardener, an outdoorsman who fed and cared for a myriad of wild animals, and he was an amazingly gifted craftsman. He built most of his home, fixed all manner of things mechanical or electrical, and he crafted beautiful spoons that he and his wife, Linda, gave out freely to those they met in the community. Despite all the wonderful accolades one could use to describe Howard, the most important thing about him was his unwavering faith in Jesus Christ. Howard once said that God did not take away his ability to walk – no, God, allowed Howard to go through his trials so that people could see that his physical circumstances were not greater than his faith in God. John 3:17, "For God sent not His son into the world to condemn the world; but that the world through Him might be saved." Howard joins his father, Robert Moore, his mother, Marguerite Moore, and his beloved little girl, Hannah Lynne Moore in Heaven. Howard has a sister Evelyn Pachucinski, and brothers Edward Moore, Douglas Moore, and Robert Moore. Howard also has a wife, Linda Moore, with whom he shares a deep and committed love. They met in the Pittsburgh airport because Linda was carrying her Bible so Howard approached her, and they have been married since June 16, 1973. Howard has a daughter, Rebekah Moore, who he is so proud of and a son, Timothy Moore, who will forever strive to be more like his father. Howard also has a grandson, Joseph Howard Moore, who brings so much joy to our family. I speak in the present tense because our brother, husband, father and grandfather has not left us behind; he has simply gone before us to wait in God's glorious presence until we meet again according to God's timing. If you have received a spoon from Howard or Linda, or have had your life blessed by Howard, please join us in celebrating his life at the Lind Funeral Home. Calling hours will be held on Wednesday, October 9, 2019 from 4pm-7pm. Funeral services will be held at 11am on Thursday, October 10, 2019. In lieu of flowers, please send donations to: Camp-Li-Lo-Li Attn: Craft Cabin 8811 Sunfish Run Rd. Randolph, NY 14755 You may leave a condolence at www.lindfuneralhome.com.
To plant a tree in memory of Howard Moore, please visit Tribute Store
Wednesday
9
October

Share Your Memory of
Howard
Upload Your Memory View All Memories
Be the first to upload a memory!
Share A Memory
Plant a Tree