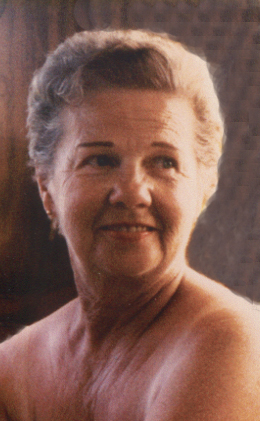 Norma Johnson Kidd, 97, a resident of Hultquist Place, passed away on January 11, 2020, two days after suffering a stroke on her 97th birthday at the Lutheran Home and Rehabilitation Center. She was born in Cleveland Ohio on January 9, 1923, the daughter of Effram and Katherine Soderberg Wester. She attended schools in Falconer, and in her earlier working years, did waitressing and cooking in several restaurants in the Jamestown area. She always enjoyed gardening, and later in life took a job working for Lutheran doing planting flowers and gardening in the 1960's and 1970's. She had a picture she was proud of, drawn by a resident who used to sit and watch her work, of her watering the flowers. She always had everything looking so nice she was told. She was also an avid seamstress, sewing and repairing for everyone who needed help. She used to say, there is always a zipper to replace. In later years she started sewing doll clothes and children's cloth books and did craft shows. She loved going to garage sales, auctions and collecting cookie jars. She also enjoyed spending winters in Florida. She is survived by her son Lance Johnson (Jennifer) of Gray, GA, her daughter, Melonie Vebber (Gary) of Lakewood, NY, six grandchildren, Steven (Janis) Phillips of Panama, NY, Michael (Cindy) Phillips of Martvillle NY and Christopher Phillips of Oswego NY, Jason Johnson, of Ohio, Daphne and Stephanie Johnson of Gray GA, fifteen great grandchildren, Ava, Olivia, Hailey, Garrett, Elise, Clayton, Courtney, Nicole, Kristy, Joseph, Cassie, Samantha, Jessica, Katie, Raychel. Also, fifteen great great grandchildren Piper, Sadie, Eliza, Adaline, Grant, Amelia, Hailee, Hunter, Rainer, Keagan, Dakota, Alyssa, Maddison, Adam, Channing and two sisters, Donna Beaver of Palmyra Pa, and Audrey Keene of Fort Meyers Fl. She was preceded in death by her first husband, Stig Johnson in 1965, her second husband William Kidd in 2015, and one sister Lucille McGill in 2015. The family would like to thank everyone at Lutheran both at Hultquist Place and the Rehab Dept, and a special thank you to Hospice for the wonderful care and love they showed her while in their care. There will be no visitation, or service at this time. Burial will be in the Sunset Hill Cemetery. Arrangements are under the care of the Lind Funeral Home, Inc. Memorials may be made to Chautauqua Hospice and Palliative Care, 20 West Fairmount Ave. Lakewood, NY 14750.
To plant a tree in memory of Norma Kidd, please visit Tribute Store
Services for Norma Kidd
There are no events scheduled. You can still show your support by planting a tree in memory of Norma Kidd.
Visit the Tribute Store

Share Your Memory of
Norma
Upload Your Memory View All Memories
Be the first to upload a memory!
Share A Memory
Plant a Tree