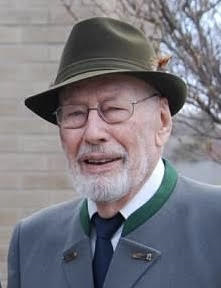 Obituary of Henry A. Geisler

Henry A. Geisler, 88, of State Street, Jamestown, NY, passed away on February 5, 2020 in Vancouver, WA at the home of his son and daughter-in-law, Andrew and Cheryl Geisler. He was born on February 10, 1931 in Krefeld-Hüls, Germany to Christiane (Haacke) and Peter Geisler. He survived the war in Germany after which he became an apprenticed electrician. In 1956 he married Elizabeth Kamp in St. Toenis, Germany and in 1957 he immigrated to the United States and chose to make Jamestown his home, becoming a citizen in 1964. Henry's wife and first-born son, Arnold ('57), joined him in Jamestown in early 1958 where they resided for the rest of their lives. Once in Jamestown they brought four more sons into this world – Thomas ('60), Ronald ('61), Andrew ('65) and John ('65). Henry was Scout Master for Boy Scout Troop 115 where he mentored, taught and inspired countless Boy Scouts and young adults. He was a member of Ingjald Lodge I.O.V., the German Club Alpine, and a parishioner at Ss. Peter and Paul Catholic Church and later of St. James Catholic Church. Henry first found work at Chautauqua Hardware upon his arrival in Jamestown and later served over 29 years with the Adanlock Corporation on Jones & Gifford Avenue as the facilities maintenance engineer, retiring in 1991. He was an honest and hard worker who took pride in his work. Once retired, he and Elizabeth travelled throughout the United States, having visited all 50 states and many territories and provinces of Canada. He was an avid gardener frequently seen tending to his vegetables and flowers meticulously on State Street. Henry was proud of the country that adopted him and, while he cherished his German roots, he was a proud American. To the end, Henry called Jamestown his hometown. He was very proud of all five sons, each of whom as first-generation Americans attended college, served in the US military, and went on to have fulfilling families and productive work lives. He was always interested in the stories of those he encountered throughout his travels and was often kidded that he was "running for mayor." He and Elizabeth hosted exchange students and opened their home to friends and strangers alike for a meal or a place to stay. It wasn't uncommon for them to open their home to anyone they came across in Jamestown whom they overheard speaking German. Henry and Elizabeth also made permanent friends during the 10 winters they spent in Cannon Beach, Oregon. Henry was preceded in death by his wife of almost 60 years Elizabeth; his mother, Christiane and father, Peter; a sister, Anneliese Christiane; and a brother, Peter. He is survived by five sons, all former military officers: LTC. Arnold (Elfriede) of Neumarkt, Germany, MAJ. Thomas (Tari) of West Ellicott, Jamestown, CPT. Ronald (Elisabeth) of Neuss, Germany, LT. Andrew (Cheryl) of Vancouver, WA., and MAJ. John (Dodi) of Lansing, MI; 15 grandchildren: Maria, Thomas, John, Matthew, Christoph, Birgitta, Annika, Alexandria, Jacob, Sean, Natasha, Michaela, Zachary, Sophie and Hanna; and five great-grandchildren: Kallaway, Addelyn Rose, Emersyn, Erik and Elise. Henry was especially thankful for the tremendous support he has received from his many friends in Jamestown and throughout the world – from Jamestown to Germany and India and all places in between. He wanted to make sure all his friends and family know that he was grateful for your cards, notes, and words of encouragement and thanks. The family will receive friends from 2 to 4 p.m. Sunday, February 23 in the Lind Funeral Home. A Memorial Mass will be held at 10 a.m. Monday, February 24 in St. James Catholic Church. The Rev. Darrell Duffy will be celebrant. In lieu of flowers please make donations to St. James Catholic Church, 27 Allen St., Jamestown, NY 14701, in the name of Henry and Elizabeth Geisler.
To plant a tree in memory of Henry Geisler, please visit Tribute Store
Sunday
23
February

Share Your Memory of
Henry
Upload Your Memory View All Memories
Be the first to upload a memory!
Share A Memory
Plant a Tree