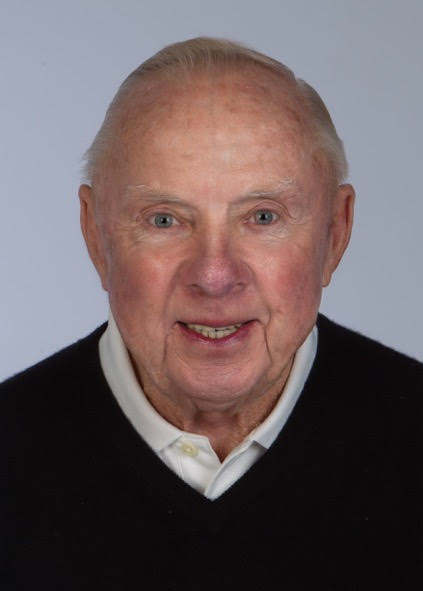 Jerome D. Lockwood "Jerry", loving husband, and father of three died on August 30th at the age of 82. Jerry was born in 1938 in Jamestown, NY. A life-long resident of the area, Jerry was known for his keen wit, kindness, and sense of humor. He was a role model to his children and grandchildren. For anyone that knew Jerry, they knew he had a passion for the game of golf. From a young age, Jerry immersed himself in the game of golf. Whether he was caddying for a member at Moonbrook Country Club or hitchhiking his way to play 9 holes at Bemus Point Golf Club, Jerry has a tremendous love for the game of golf. The Golf Channel was still on the TV as his final moments passed. He played golf for a season at Jamestown Community College before earning a scholarship to play at the University of Kentucky. It was at UK that he met the love of his life - Jane Palmer. They built a life together and he and "Janie", as he affectionately called her, were married 57 years. Jerry holds numerous distinctions and accolades as a local and regional golfer. He had won the County Amateur title several times, numerous member-guest titles, set the course record at Moonbrook, and has the sole distinction of being the only member to win the Club Championship in 3 different decades - 60's, 70's and 80's. In recent years he could be found at sporting events supporting his 8 grandchildren. He was a true mentor to his grandsons on the golf course but also the number one fan for the granddaughters at their sports and activities too. Professionally, Jerry was an entrepreneur. He started in the insurance business as a claims adjuster for The Travelers Insurance Company and soon struck out on his own as an independent insurance agent, creating "Lockwood Agency". After several decades of success, Jerry welcomed his sons, Mark and David into the insurance business, where they still operate the Main Street office today. Surviving is his wife of 57 years, Jane Palmer Lockwood; and a daughter, Kristie (Jay) Traverso of Orland Park, Illinois and two sons, Mark (Tammy) Lockwood of Jamestown, and David (Tanya) Lockwood of Bemus Point. Grandchildren include Sarah and Molly Traverso, Wilson, Ellen, and Benjamin Lockwood and Carling, Ryan, and Meghan Lockwood. Also surviving is a sister, Martha (Stephen) Davis of Charlottesville, VA. He was preceded in death by his father, George Lockwood; mother, Marguerite Sellstrom Frazier; and his brother, Daniel Lockwood. The family would like to extend appreciation to the staff at Memory Garden for their kind and compassionate care these last few months. Friends will be received this Saturday, September 5th from 3 to 6 p.m. in The Lind Funeral Home, where CDC guidelines for social distancing of 6 feet is required and masks are mandatory at all times. A memorial donation may be made to the newly created Jerry Lockwood Golf Scholarship Fund, care of the Chautauqua Region Community Foundation, 418 Spring St., Jamestown, NY.
To plant a tree in memory of Jerome Lockwood, please visit Tribute Store
Saturday
5
September

Share Your Memory of
Jerome
Upload Your Memory View All Memories
Be the first to upload a memory!
Share A Memory
Plant a Tree