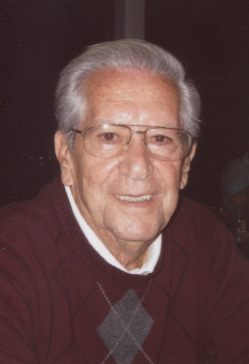 Joseph R. Constantino, 92, of 317 Fairmount Avenue, died Friday September 11, 2020, in UPMC Chautauqua. A Jamestown resident all of his life, he was born May 25, 1928, a son of the late Frank and Mary Cavallero Constantino. He was a 1946 graduate of Jamestown High School. A Korean War veteran, he served in the US Air Force from 1950-54. Prior to his retirement he was employed by St. Johnsbury Trucking as an account executive. He earlier had worked for Red Star Trucking. He was a communicant of St. James Catholic Church. His memberships include Lakewood Rod and Gun Club, Marco Polo Club, Knights of Columbus and Celtics Club. One of Joe's greatest joys in life was watching his grandchildren grow up. He never missed a baseball game or dance recital. He also loved spending time with family, his many friends, the game of golf, and the NY Yankees. Surviving are his wife Josephine Raffa Constantino, whom he married April 11, 1953; two children Beverly (Wayne) Stewart of Estero, FL and John Constantino of Jamestown; two grandchildren Adam (Megan) Stewart of Harrisburg, PA and Ashley (Damien) Shadrick of Naples, FL; three great grandchildren Aubrey Mae and Mia Josephine Stewart and Isabella Grace Shadrick; a brother Samuel Constantino of Erie, PA; a sister Nancy Rogers of Indianapolis, IN and several nieces and nephews. Besides his parents he was preceded in death by three brothers Dimetrio, John and Anthony Constantino and an infant sister Mary Constantino. A private memorial mass will be held at the convenience of the family. Inurnment will be in Holy Sepulchre Cemetery. Visitation will not be observed. Memorials may be made to St. Jude Children's Research Hospital, 262 Danny Thomas Place, Memphis, TN 38105. Words of condolence may be shared at www.lindfuneralhome.com.