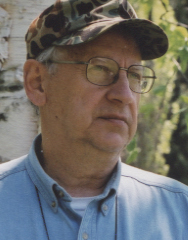 John S. Andrea, 86, of Ashville, passed away on Monday, Oct. 12, 2020 in UPMC Hamot, Erie. He was born May 14, 1934, in Jamestown, the son of Albanian immigrants, Spero and Anna Papageorge Andrea. He served with the US Army 1st Infantry Division as a forward observer for a Mortar battalion with the rank of Spec. 1st Class. Before retirement, he was employed by Laborers Union Local 600. He was a member of the Chautauqua Lake Fishing Association. John has spent the greater share of his life taking in every aspect of the outdoors, hunting, fishing, and fur trapping which has been the impetus for all his wildlife paintings. He has been known to be a nonconformist, a maverick, and an apostle of Henry David Thoreau. One of his favorite quotes from Thoreau is "Hope and the future for me are not in lawns and cultivated fields, not in towns and cities but in the impervious and quaking swamps." Besides his interest in nature he also claimed to be the foremost authority on American Jazz. He played drums off and on with many small groups and big bands. John is survived by his wife, Cheryl L. (Jacobs) Andrea, whom he married May 30, 1968; a daughter Jill (Jamie) Gilbert; four grandchildren: Ethyn, Nathyn, Justin, and Monica Gilbert. In addition to his parents, he was preceded in death by two brothers: Gust S. Andrea and Paul S. Andrea; and three sisters: Alfreda Andrea, Julie Ticco, and Mary Hunter. A private service will be held at the convenience of the family. Visitation will not be observed. Entombment will be in Forest Lawn Cemetery, Buffalo. Memorials may be made to a charity of one's choice.
To plant a tree in memory of John Andrea, please visit Tribute Store
Services for John Andrea
There are no events scheduled. You can still show your support by planting a tree in memory of John Andrea.
Visit the Tribute Store