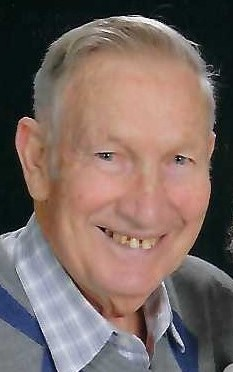 Alvin Leon James, 95, of Anderson, SC, formerly of Ashville, NY, passed away quietly on December 23, 2021, at Summit Place Assisted Living, Anderson, SC. He was born December 14, 1926, in Ashville, NY, a son of the late Leon C. and Lucile Davenport James. Alvin was a longtime resident of Ashville and relocated to Anderson, SC in 2010. He attended the former Ashville School and the Lakewood High School. He married Betty Jean Clark on January 25, 1947, and they enjoyed 71 years of marriage before her passing on August 14, 2018. Alvin was a veteran of the U.S. Army serving during World War II from February 1945, to December 1946 in Japan. Before his retirement he was co-owner and secretary-treasurer of the family business, Tri-James Service, Inc. in Lakewood, NY. In earlier years he had worked for the former National Worsted Mills, Jamestown Veneer and Plywood and for the Weber-Knapp Company. He was a member of the American Legion, the Lakewood Rod & Gun Club, and the Harmony Senior Citizens. Alvin loved spending time with his family and his many friends. He enjoyed being helpful and lending a hand to those in need. He and Jean also loved to travel with the senior citizens bus tours. Alvin is survived by two sons: Richard A. (Joanne) James of Anderson, SC, and Edward A. James of Hamilton, VA; four grandchildren: Sarah James (Christopher) Koriath of Lawrenceville, GA, Amanda James of Lancaster, OH, Bretta James Barrera of Alexandria, VA, Brady (Kelley) James of Roanoke, VA; three great grandchildren: Taylor Barrera, and Natalie and Mason Koriath; and one brother, Clyde James of Lakewood, NY. In addition to his parents, he was preceded in death by his wife, Betty Jean, four brothers: LeRoy, Donald, Walter, and Lewis James; two sisters: Dorothy Seeley and Phyllis Barton; and a daughter-in-law, Lynnette (Wassink) James. Interment for Alvin and Jean will be in the Maple Grove Cemetery, Ashville, NY at a later date. Memorial donations may be made to your local veterans or Hospice organizations.

Share Your Memory of
Alvin
Upload Your Memory View All Memories
Be the first to upload a memory!
Share A Memory