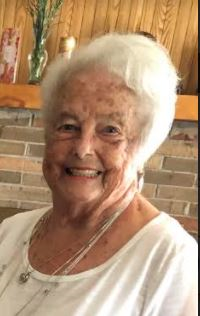 Anna J. Yahn, 90, formerly of Carpenter-Pringle Road, Ashville, passed peacefully Tuesday January 11, 2022, in the home of her daughter in Aurora, OH. She was born July 1, 1931, in Curwinsville, PA, the daughter of the late Fritz and Zelda Vaughn Berg. She was a 1949 graduate of Jamestown High School. She and her husband owned and operated Yahn's Catering for many years. She was a member of Ingjald Lodge 65 Independent Order of Vikings. Surviving are five children Cynthia (Bruce) Jungquist of Aurora, OH, Gary (Debbie) Yahn of Frewsburg, Steven (Debbie) Yahn of Chico, CA, Cheryl (John) Brackin of Riverside, CA and Christine (Brad) Lawson of Ashville, twelve grandchildren Justin Jungquist, Hilary Riccutti, Heather Yahn, Holly McBride, Steven Yahn, Kristen Yahn, Nicholas Stefanelli, Kara Bellows, Shannon Lukowski, Allyson Lawson, Courtney Lawson and Bradley Lawson and fourteen great grandchildren. She was preceded in death by her husband of 60 years Gerald Yahn, whom she married March 25, 1950, and who passed July 29, 2010. A celebration of life will be held at a later date. Memorials may be made to St. Jude Children's Research Hospital, 501 St. Jude Place, Memphis, TN 38105. You may leave words of condolence at www.lindfuneralhome.com.

Share Your Memory of
Anna
Upload Your Memory View All Memories
Be the first to upload a memory!
Share A Memory