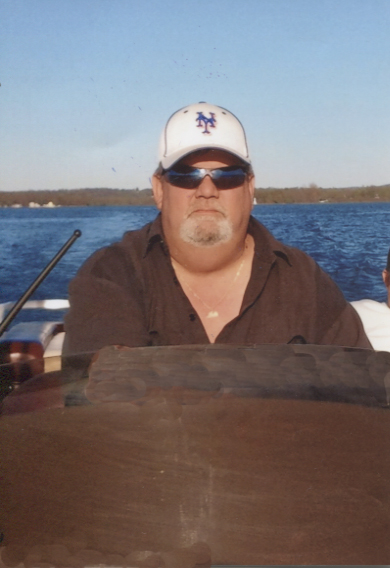 Kevin R. Vik, 63, of Bemus Point, NY, passed away at 4:26 pm Thursday, July 7, 2022, in the UPMC Hamot Medical Center, Erie, PA. A lifelong area resident, he was born August 31, 1958, in Jamestown, NY, a son of the late Roy and Althea Hoover Vik. He was a graduate of Jamestown High School and took several management courses over the years. Before his early retirement due to health concerns, he had been employed by Jamestown Metal Products and earlier at the former Falconer Plate Glass Industries. He and his family were lifelong members of the Zion Tabernacle. He was a member of the Henry Mosher Post 638 American Legion, Falconer, NY. He will be remembered as a loving and caring husband, father, and grandfather who loved spending time with his family. He was an avid dart shooter and enjoyed camping, golfing, and spending time on his pontoon boat. He was also a huge fan of the Cleveland Browns and the New York Mets and spent many games yelling at the television along with his boys. Kevin and Darla enjoyed many things together, one being traveling with their camper to NASCAR races, concerts, and amusement parks. After he became ill, he enjoyed sitting on his back deck with his wife and family playing his favorite music. Surviving are his wife, Darla Dilker Vik, whom he married March 30, 1996, his four sons; Kevin (Lucy) Vik of Warsaw, NY, Ryan (Anna) Vik of Jamestown, NY, Andrew (Megan) Vik of Lander, PA, Cole Vik of Bemus Point, NY, four grandchildren; Morgan and Mason Vik of Jamestown, Haden and Braylon Vik of Lander, PA, his sister, Marilyn Town of Ellington, NY, David (Lynette) Johnson of Bemus Point, NY, whom he was considered a father to, as well as several nieces and nephews whom he loved as his own children. Besides his parents, he was preceded in death by his maternal grandparents, Orrie and Rose Hoover, his paternal grandparents, Andrew and Minnie Vik, and his sister, Sharon D. Johnson, and a brother in law, David Leonard Johnson, II. A memorial service for Kevin will be held at 2:00 pm Tuesday, July 12, 2022, in the Lind Funeral Home. The Rev. Robert Reeves, pastor of the Zion Tabernacle will officiate. The family will receive friends from 12 (noon) to 2:00 pm, two hours prior to the service on Tuesday in the funeral home. Following the service, the family will continue to share memories and celebrate Kevin's life with a gathering at the Falconer Legion. Memorials may be made to the Zion Tabernacle, 142 Foote Ave. Jamestown, NY 14701.

Share Your Memory of
Kevin
Upload Your Memory View All Memories
Be the first to upload a memory!
Share A Memory