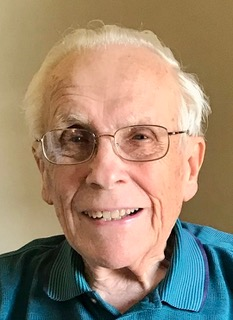 Johannes (Jan) Jacobus Teigeler, 93, of Lakewood, NY, passed away on Saturday, August 6, 2022, in the home of his daughter Dawn and her husband Bob, in Perry, OH, with the care and guidance of Hospice of the Western Reserve, Northern Ohio region, as well as the Behm Family Funeral Home, Madison, OH. A memorial service will be held at a later date, to be announced by the Lind Funeral Home, who will be handling the arrangements. Burial will be at Sunset Hill Cemetery, Lakewood, NY. Johannes was born in Rotterdam, Holland (the Netherlands), to Arend Teigeler and Willempje Teigeler-Langerlaan, on August 19, 1928. He spent his youth enjoying skating, biking, sailing, studying, and participating in the Sea Scouts NL, where he later became staff in the ranking of Helmsman. At one time, Jan could speak 5 languages. Memories of World War II there, were a dark period for the family. As a young adult he served in the Dutch Merchant Navy, as a radio officer on cargo ships. While in port in New York City, he met and fell in love with Blanche Nellie Piper, a vivacious dark-haired beauty. They were married in the Pilgrim Father's Church of Delfshaven, the Netherlands, spent their honeymoon traveling throughout Europe and then returned to the United States to further celebrate with Blanche's family. Jan studied business at JCC, and joined his father-in-law's independent insurance company, the Charles D. Piper Insurance Agency, as a claims adjuster, and years later they merged with Taber & Taber of Jamestown, from where he retired. Jan was very proud to become a United States citizen in 1976. The family lived in Jamestown for 14 years and then moved to Lakewood, where he has lived for 52 years. He loved his family and enjoyed all of the activities that come with that, including roller skating, sledding and skiing. He also participated in many plays at the Lucille Ball Little Theatre of Jamestown. He would learn whichever skills or talents were required of the roles he played, such as singing, dancing, playing musical instruments and even lassoing, which he practiced on his children or bushes in the yard. Jan and Blanche enjoyed traveling and took many trips together. They especially enjoyed New England and New Smyrna Beach, FL, and even ventured to Europe with the whole family. They were very active in their church, First Congregational Church, UCC, where they raised their family and sang in the choir. He spent some of his later years also singing in the Chautauqua Institution choir, with his dear friend and loyal companion, Margaret (Mardi) Anderson. He also enjoyed, gardening, bird watching, collecting things, fixing things, metal detecting, playing tennis and golf, cooking his special pancakes and london broil, attending local concerts and boating on Chautauqua Lake. Jan was a devoted, 60+ year member of the Jamestown Lion's Club, and earned the distinction of having perfect attendance. He served in every capacity possible. Also, a member of the Jamestown Coin Club, Metal Detectors Association, and the Lakewood Rod & Gun Club. He was one to always lend a hand and thoroughly enjoyed his civic duties and contributions to the community. Oftentimes his contributions were a quip or witticism that came out of nowhere and was very funny. Jan is survived by his 3 children, Charles Teigeler of Savannah, GA, Dawn (Bob) Teigeler of Perry, OH, Gloria Teigeler of Summerville, SC, his sister, Jacqueline Hendriks-Teigeler of Veldhoven, the Netherlands, 4 grand-children, Laura (Joe) Walker, OH, Andrew Teigeler, OH, Jacob (Nashali) Zuck, GA, Jesstine Zuck, GA, 2 great- grandchildren, Dennis Zuck and Jackson Walker, nieces and nephews; Paul (Diane) Piper, Ivonne (Peter) Joppen-Hendriks, Peter (Henjo) Hendriks, Theo (Lianne) Hendriks, and Willy (Wim) Hendriks-van der Aalst, second cousins, Victor (Inekee) Schoenmakers, Rob (Marjon) Schoenmakers and their families. Though his family abroad lived a great distance away, he really cared about them and treasured their visits over the years. Along with his parents, he is predeceased by his wife of 48 years, Blanche N. Piper Teigeler, grand-daughters, Shelby and Jacqueline Teigeler, nieces, Laurie and Cheryl Piper, brother-in-law, Piet Hendriks and a dear friend and faithful companion, Mardi Anderson. In lieu of flowers, memorials may be made to the Jamestown Lions Club, P.O. Box 3683, Jamestown, NY 14702-3683, First Congregational United Church of Christ, in c/o Pilgrim Memorial UCC, 70 McKinley Avenue, Jamestown, NY 14701. You may leave words of condolence at www.lindfuneralhome.com.

Share Your Memory of
Johannes
Upload Your Memory View All Memories
Be the first to upload a memory!
Share A Memory