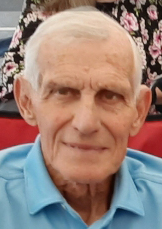 Russell Joseph Sullivan, born September 24,1934, left this beautiful earth and all who loved him, November 6, 2022 into the arms of our Lord Jesus Christ. His treasured wife, loving partner and best friend, Rita Ann, was at his side until the end. He was a graduate from Jamestown High School class of 1951. He then served in the US Army during the Korean Conflict and was stationed in Japan serving as a radio communicator, advancing to Corporal, and leaving after his 2 years of service. Growing up with little resources, he developed many skills and a strong work ethic, shining shoes at age 5. Russ worked 40 years for Hydro Fumigating along with various side jobs from bartending to cleaning offices, and handyman work. Russ never tired of caring for his children, entertaining them with his many talents, jokes, and games. He loved coaching his children in a variety of sports activities. Russ was the first to receive the Citizenship Award from the Jamestown Boys Club and was instrumental as a fundraiser and board member for the Club, also supporting the decision to allow girls to attend. One of his favorite hobbies was making custom doll houses. He not only made them for his grandchildren, but he also donated to local churches and to ill and terminally ill children in the Chautauqua County area. Russ never retired from working but at the age of 62 he retired from Hydro Fumigating and was able to enjoy his lifelong passion of golfing with his buddies. He played basketball and volleyball to 80 years of age and exercised daily until the last week of his life. Throughout his life, he had many who respected and adored him for his depth of understanding, kindness, natural intelligence, true friendship, and devoted love of family. Russ will be missed by his family and his many friends, including special friends at the Allen Street Diner and at Tim Horton's, and all that knew him. He is survived by his wife, Rita Ann Westerlund Sullivan and stepdaughter Linda M. Erwin (Don); his children, Julie Sullivan Brace (Roger), Tammy Josephson (Ron) and Dan Sullivan from his first wife, Patricia Yankoski Sullivan Booth; and Laurel Sullivan, Scott Sullivan (Karla), and Crystal Theriault (Troy) from his second wife, Nancy Sullivan. Additionally, he is survived by his grandchildren: Erin Sullivan, Abby Zahn, Maggie Sullivan, James Sullivan Scully; Joshua, Hannah, Faith, Rachel, and John Seeley; Katie Jo Sullivan; Aaron Sullivan, Connor and Sophia Theriault; Camden and Colton Armella; and 2 great grandchildren, Zaylee Gillard and Jack Zahn. He is also survived by his sweet loving pal, his dog Rosie. At the request of Russ, there will be no viewing or service. Donations may be sent in his name to St. Jude Children's Research Hospital, 501 St. Jude Place, Memphis, TN 38105.

Share Your Memory of
Russell
Upload Your Memory View All Memories
Be the first to upload a memory!
Share A Memory